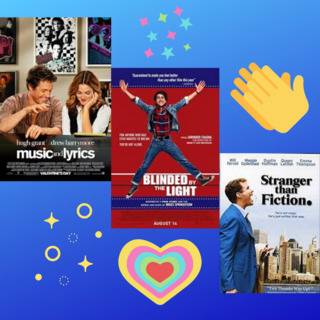 "I wish I had started writing sooner."

"I don't have what it takes to write this story."

"I don't know if anyone cares what I have to say."
"I have no idea where to start."

"I wasted so much time."

"I wasted so many opportunities."

If any of this sounds familiar, then you need a big dose of encouragement, inspiration, and faith. Something that will motivate you to carve out a tiny bit of your day, your week, your month, for realizing your dreams.

In short, you need to watch these movies.

And don't feel guilty--they're good for you. Check them out for a life-affirming shot of energy that will make you believe you can do it!

BLINDED BY THE LIGHT

Based on the memoir by Sarfraz Manzoor and directed by Gurinder Chadha ("Bend It Like Beckham"), this is a coming-of-age story about a Pakistani teen in 1980s England who falls in love with the music of Bruce Springsteen. It's about the magic of words to break down barriers, inspire change, and stand up to injustice. It's about how an American rocker's lyrics inspire the young hero to break out of familial and cultural limitations, overcome his own doubts about becoming a writer, and find his own empowered voice.  I watched this film with tears streaming down my smiling face and haven't stopped thinking about it since.

Much more than a rom-com about the unlikely pairing of a washed-up 80s rock star (Hugh Grant) who's been reduced to playing gigs at class reunions and amusement parks and the woman who takes care of his plants (Drew Barrymore), Music & Lyrics is about the joy and pain of the creative process and the risks we must take to achieve greatness. I've only seen it about five times. Directed by Marc Lawrence.

For those who want to take a comic deep-dive into writing technique, the creative process, and where ideas come from, go no further than Stranger Than Fiction. A brilliant "what if" brought to life, Stranger Than Fiction is about a buttoned-up IRS auditor (Will Ferrell) assigned to audit free-spirited baker Maggie Gyllenhaal. Sounds like classic rom-com material, except there's one major catch: Farrell's character has started hearing a voice narrating his life. And comes to realize he is a character in a book. And not just anyone's book; a famous author's (Emma Thompson) book. Who's blocked on the ending. And is being nudged toward completing it by Queen Latifah. More important, the end of the book will determine if Will Farrell's character lives or dies. So he seeks out help from an academic expert on the works of Emma Thompson's character, played by Dustin Hoffman. It's brilliant from beginning to end, and you will never again think of writing fiction in quite the same way. Directed by Marc Forster.