Tags: business of being an author, craft, encouragement, fiction 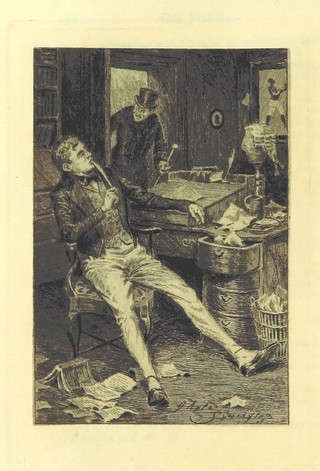 [Image courtesy of The British Library, from The Novels of Captain Marryat, page 208]

Let's bust up the seven biggest myths about novelists. If you're a novelist, an aspiring novelist, a devourer of novels, or all of the above, may the following illuminate, encourage, and inspire you.

I spent much of my life buying into all those "Truths" about novelists. Some of them were assumptions I made over a lifetime of reading novels, and others I picked up from various books and blogs on writing.

When I started writing, I figured that if I didn't fit into one of those so-called Truths I'd read about, there had to be something wrong with me. It took me a long time to realize that it wasn't a question of right or wrong; rather it's that what works for another novelist might not work for me, and vice versa.

The 7 myths about novelists:

MYTH #1: A novelist is just like her main character.

I remember reading Literacy and Longing in L.A., a novel by Jennifer Kaufman and Karen Mack, and being shocked when the protagonist revealed that she disliked Jane Austen. How could the authors of this book not like Austen??

Fortunately, I had the opportunity to find out when Jennifer and Karen were my fellow panelists at the L.A. Times Festival of Books. One of the things they talked about was their having been barraged with emails by angry Austen fans. The gist of their response? That readers should not confuse the tastes of the authors with those of their heroine. In fact, Jennifer and Karen are great admirers of Miss Austen.

MYTH #2: A novelist should only write what she knows. (A subset of #1 above.)

How to Be Good by Nick Hornby comes to mind. So does Harry Potter, Alice in Wonderland, or The Velveteen Rabbit. How much poorer would the world be if these authors had listened to the voice of authority saying "Write only what you know."

MYTH #3: A novelist always writes every day—and feels compelled to do so.

This "Truth" was the biggest one for me to get over, especially with all those "real writers write every day" proclamations in countless books and blogs. Ouch. Because while I do strive to write every day, sometimes I need to take a day or more off, depending on what's going on in my life and the state of my deadlines and whether I just have to let the thing marinate.

The first time I gave myself permission to stop feeling bad about this was when I saw Zadie Smith (On Beauty) speak at UCLA. She unapologetically stated from the stage that she does not write every day.

She also talked about taking a long time to get the first 50 or so pages right, spending as much as two or three years on it to figure it out, but once she did, she would power through the rest of the novel, writing constantly and churning out page after page till the book was finished.

Smith has since become a bit more wistful about not writing every day. From a Nov. 11, 2009 NPR interview:

"I wish I did more than anything, and I wish I had the compulsion," she says. "But in my defense, I think that novels should feel very necessary to the people who write them. I just realized quite early on that I'm not going to be the type who can write a novel every two years. I think you need to feel an urgency about the act. Otherwise, when you read it, you feel no urgency, either. So I don't write unless I really feel I need to, and that's a luxury."

Ian McEwan (Atonement) appears to be content about not writing every day:

"I tend to leave long gaps between novels; I'm quite happy not to write for months on end. I don't have anxieties about writer's block* either – I don't even believe in the concept – but I'm a great believer in hesitation. I think there's nothing wrong with pausing when you're not sure how to proceed. And in that rather dreamy, floating kind of mental state (one which I long for once I've started a book and can no longer have it) I go where my reading and thoughts and travels take me."

MYTH #4: A novelist isn't doing her job properly unless she's cranking out x-number of words per day. (A subset of Myth #3 above.)

It's not about quantity, it's about quality. Some days I write a thousand words. Other days, 200 words. And some days, a paragraph. I'm not a word factory, and neither are you.

So stop beating yourself up, okay? However, if you're not writing because you're blocked, then see Myth #5 and Myth #6 below.

MYTH #5: A novelist always knows what happens next in the story.

Lots of books will tell you that being a plotter is the way to go. Lots of authors swear by outlines (and more power to them, I say). Which is why I tried to plot out my first novel. The result: lots of suffering.

Aurelia (The Journeys of John and Julia: Genesis) talks about why she doesn't outline:

"I know what the story arc is and from there I allow my characters to tell me the story, and I am again and again surprised how differently the story moves forward than what I would have expected! In the very beginning, when I started to write I once was convinced I knew what had to happen next, and I ended up with horrible writer's block. When I finally surrendered to not knowing, the story moved on without a hitch."

It took me a long time to realize the truth of those words, but boy am I glad I did. Now I understand that one of the most exciting things about writing is discovering what happens next without having to know it all in advance. Now I understand that whenever I think I know what my characters are "supposed" to do next, I'm screwed. Either I force myself to write down something that isn't very good at all, or I get blocked.

Which brings us to the next myth:

MYTH #6: All novelists have to deal with writer's block.

That's what I thought, too, but Ian McEwan isn't the only one who doesn't get writer's block (See Myth #3 above). Just google the words "I don't get writer's block," and you'll see pages and pages of writers talking about not getting writer's block. Ever. Or if they have had it, it was a one-off, as in what happened to Aurelia (see Myth #5 above).

Although all writers develop their own set of tips and tools to get into the relaxed state they need to be in to create, for me the bottom line is Aurelia's "surrendering to not knowing."

Of course, if you're like me and have a very bossy inner know-it-all, you'll find lots of reasons not to surrender. Don't listen to any of them. When I surrender to not knowing, writing is fluid, exhilarating, elevating, and supercharged. In other words, the opposite of writer's block.

MYTH #7: A novelist has to suffer for her art.

This falls into the same category of having to suffer through writer's block (see Myth #6 above). Or being a starving artist living in a garret. Or relying on a fifth of vodka to create. Or a handful of pills.

I won't deny that some of my greatest life lessons have come out of suffering, but that doesn't mean I need to chase it down or consider it a badge of honor. Although all of life, both the joyful and the horrific, informs my writing, the truth is that the happier I am, the better I write–and the more motivated I am to do it. When I'm miserable the last thing I want to do is sit down and write. And a fifth of vodka can never compete with clarity of mind.